The 1960s green revolution was a boon to farmers as they started using the high-yielding variety seeds (HYV). The productivity of wheat and rice increased drastically and farmers were able to get good prices of their commodity. After a very long time, India started a journey of being a food surplus nation from a food-deficit nation.

Our imports of cereals decreased and eventually, India started exporting them. This was a major revolution in the field of Agriculture in India. However, any technology with its advantages also brings some unwanted disadvantages. The high-yielding varieties demanded a heavy dosage of chemical fertilizers and insecticides.

Lured into producing more farm produce, farmers started applying overdosage of fertilizers and insecticides. This led to nasty consequences. The heavy usage of such chemical inputs degraded the soil fertility up to the extent that some of the farmland got barren. Even the groundwater was contaminated by harmful chemicals which caused serious diseases to the people who consumed groundwater.

Now it has become a common practice of spraying the chemicals on fruits and vegetables and promoting unnatural growth by injecting the artificial chemicals. However, people have slowly started to understand the ill effects of such practices on human health.

And that is where organic farming comes into the picture. As the demand for organic products is increasing in the market, many farmers have shifted from conventional farming to organic farming with the help of mobile farming app . People have either started or want to start growing their organic food on their balconies, terraces, or farm. The thing which stops them from adopting organic farming is the lack of information on HOW TO START ORGANIC FARMING.

Don`t worry, after reading this blog till the end you will have a clear idea of organic farming and can easily start it. Let`s know step by step how to start organic farming in India and what important things to be taken care of while doing organic farming.

If you want to start organic farming at your balcony or terrace, then this might be a perfect source of information for you.

How to Start Organic Farming in India

If you are planning to start organic farming at your farm, follow the below steps:

The India organic certificate is accepted internationally by the countries. Hence once you have this certificate with you, you can easily export the Agri produce to the international market.

Let us know more about the India organic certificate and how to get this certificate.

The India Organic certificate is provided by The Agriculture and Processed Food Products Export Development Authority (APEDA), which comes under the Ministry of commerce and industry, Government of India. The India Organic certificate is based upon the National Programme for Organic Production (NPOP). To read in detail about the NPOP and the organic farming concepts, click here.

Now let us see in detail how to apply for India Organic certification from APEDA:

The India organic certificate is issued by some of the accredited certification bodies under NPOP. Hence, you have to check the list and contact your nearest affiliated body.

Here is the list of all ACCREDITED CERTIFICATION BODIES UNDER NPOP 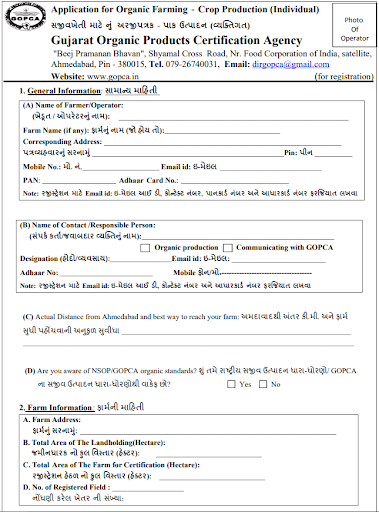 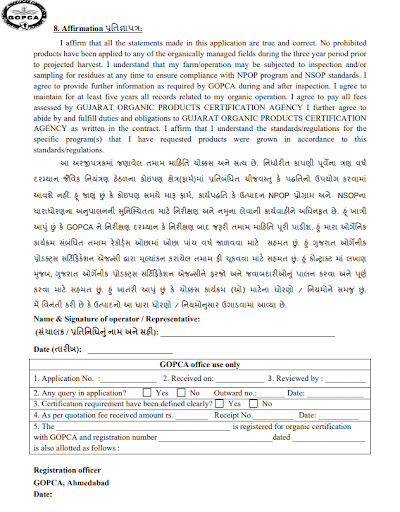 Once the form is filled, send the supporting documents with a filled form to the agency and wait for their reply. Further information will be provided by the agency. This was the whole procedure for getting the India Organic certificate. Now, let’s talk about the price you have to pay for getting the certificates.

So the pricing for getting the India organic certificate depends upon your landholding. However, roughly it costs around Rs.40,000 to 50,000 for 5-6 acres of land.

The following is the price break-up for one of the agencies. Kindly note one thing that prices vary according to the agency you contact. 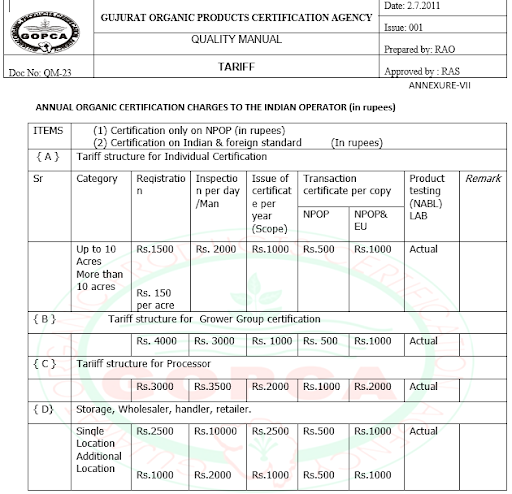 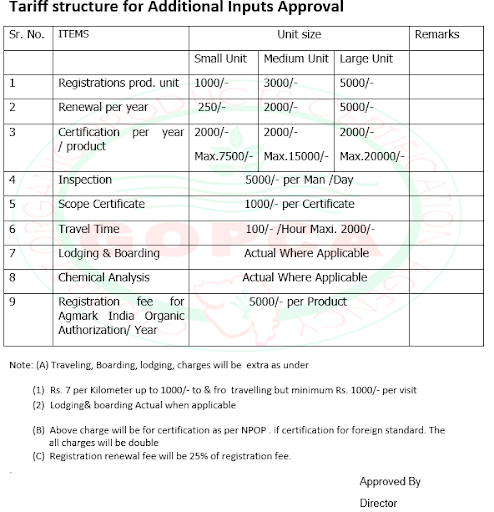 If you want to check out the pricing and other details, contact the agency by clicking here.

If your objective is to supply organic commodities in the domestic market then you may not require to spend this much money.

There is an alternative for getting a free organic certificate. But with that certificate, you can only supply your organic produce domestically i.e. in India.

The PGS organic certificate is available through regional councils present in varied geography in India. These councils are coming under the Ministry of Agriculture and Farmers Welfare.

There is one thing to be noted carefully i.e. as PGS organic certificate is a cluster-based approach, hence the certificate is not given to the individual farmers. There should be a minimum of a group of 5 members while applying. If you are a single farmer, you can join the groups which have been formed previously.

Let’s see the process of getting the PGS organic certificate in detail:

2. If you are an individual farmer and want to join with other available groups click on `Local Groups`

3. Enter the details and select your local group and contact them directly through the contact details available. After contacting, they will inform in detail for the further procedure.

4. Let’s say if you have formed a group of a minimum of 5, and want to register a new group and get a certification, then click on login and then `LocalGroupLogin`.

If you are a new user, you can register first and then login and add the details of all your members. After filling in all the details, submit the form and wait for the reply from the PGS India team. Once all the formality is over, you will receive your PGS Organic certificate. This is the symbol of the PGS India certificate to check the authenticity:

You will receive a PGS India Green certificate for 3 years of your organic farming transformation. After successfully completing the three years you will get the following certificate:

Phew…… Yes, It was long :). But believe me, getting organic certification is the most important step for starting your own Organic farming. Once this step is over, you are good to go for the rest of your steps required growing organic food.

It is obvious that while in the certification process, you have started growing the crops, however, let’s see the steps one by one for more clarity.

Let us look back at the history. Agriculture started with organic farming. There were no chemicals used before 60 years. The chemicals used in Agriculture are the scientific inventions of scientists. During that time, people were growing all the crops following complete organic procedures. Hence, at present, we can also grow any crop organically.

Even paddy which requires a high amount of water and chemical fertilizers can be grown organically. Here is the success story for organic paddy.

However, it is always advisable to grow the crop according to geographical, soil, and environmental condition. Look around and observe what other farmers are growing. Keep a note on market prices regularly and select the commodity which fetches a good price and you can have good profit at the end of the season.

You can get some idea selecting the crop according to your state from here.

If you have grown organic food at your farm and you don’t know where to sell it after harvesting then you will be in big trouble. Not all wholesalers need organically grown food. And if they are ready to buy from you, then they won’t offer a special price for the organically grown produce.

Hence, once you think about practicing organic farming, you must have a clear idea of who will be the buyer. In which market you will sell your product. Once have some sort of idea on this front then it will be very easy for you to sell the product after harvesting.

The following are some of the ways you can follow for the market linkages:

APMCs: APMCs are Agriculture Produce Market Committees. They are the government set infrastructure where farmers can sell their produce to the traders. Try visiting the APMC before the harvest season, get some information regarding the traders who are dealing in organic products and you can sell your products to them. Contract Farming: Before sowing season starts, you can have collaborations with the companies which guarantee the buyback of your produce after harvesting. The prices and quantity are decided before sowing and once the products are harvested the company will buy all the products from you as per the decided prices. However, contract farming is only advisable if you have large landholding and can fulfill the needs of the company in terms of quality and quantity. Processing Units: Once the commodity is harvested you can take it to processing units and add value to the raw product. For eg. If you are growing organic Tomatoes, you can process them to make ketchup and sell the organic ketchup in the market. This will lead you to fetch more prices than selling raw tomatoes. Warehouses and Cold storages: After harvesting, if you feel that the prices of the commodity are very less in the market and you believe it will increase after few months, you can take your commodity and store them in warehouse or cold storages available in your vicinity.

As we discussed earlier, conventional farming can be done using chemical fertilizers and pesticides. No doubt it shows results but also has an adverse effect on the environment as well as the human body.

Hence, to start organic farming, it is advisable that you should know how to make the organic fertilizer and pesticide at your own farm vicinity. Using organic inputs will not leave any residues in the commodity and hence it is safe for the human body to consume.

Let us look at some of the ways through which organic fertilizer and pesticide can be made at your own farm:

Replace DAP: With the mixture of cow dung, cow urine, jaggery, gram flour, fertile soil taken from nearby trees or rivers can act as an organic fertilizer that can replace Di-Ammonium Phosphate (DAP). The mixture has a high content of nitrogen and phosphorus and can enhance soil texture Micronutrient mixture: Mixing neem kernel powder, gram flour, jaggery and waste decomposer liquid (ready made available in the market) can be a good micronutrient solution for plants and can cure all deficiency symptoms. Pesticide: Mixing and boiling the powder of neem tree branches or leaf and datura plants can form highly poisonous and concentrated organic pesticide. Once it is made, you can dilute and spray it in the field.

Want to know how to make organic fungicide at your farm? Follow this URL and see the video. Organic Fungicide

If you don’t want to make the organic inputs on your own then you can buy them directly from the market. Many good companies are providing pure organic fertilizer and pesticides in the market and helping the farmers. Check this out for varied organic pesticides and fertilizers.

Once all the procedure is done, you are ready to harvest your first organically grown food at your farm.

Now, if you are here reading the last line, I hope you have a clear understanding of how to start organic farming in India.

Please subscribe to us to read such insightful articles. Also if you have any suggestions or queries, comment down below and help us to improve.