Types and Benefits of Contract Farming

Contract farming in India seems like a brand-new concept. Many people came to know about the contract based farming recently due to the farm bill passed by the government. However, the reality is different. Contract farming is an old concept in India. During the 1850s-60s, first time Indian cotton got credit and exported to Britain as US supplies got disrupted. This cotton was grown by indian farmers under the contract signed with east india company. With the east india company being mentioned, how can we forget about the plantation of tea and coffee in north east and south while poppy and indigo in the plains by the indian farmers grown under the contract with Britishers. Yes, under these contracts the farmers were exploited. However, the scenario changed after independence. In the 1950s first time contract based seed production started. The concept got recognition when a FMCG company called PepsiCo came to India and set up a tomato processing plant in Hoshiarpur, Punjab. They procured the tomatoes from farmers directly by setting up contracts with them. This led to an increase in tomato yield from 7.5 tons per acre to 20 tons per acre. But you might be wondering what is contract farming? Is it good for the farmers? What is the type of contract farming practiced in india? Don`t worry, all your questions will be answered in this article. Just stay tuned till the end.

So, What is Contract Farming?

Contract farming is an agreement between the producer (farmer or farmer organization) and the buyers (exporters, processing units) mutually agreeing upon the price, quality, and quantity of the produce which will be exchanged after the harvesting. If you didn’t understand the definition. Don`t worry, let us understand it in an easy way.

Assume that you are a farmer growing potato on your farmland and I am running a company which makes potato chips. Every year, to manufacture chips I need good quality potatoes. So from where to buy the potato? One option is to buy from the market. But there is a problem here. How can I know that the potato which I am buying is as per the required quality? It can be possible that the farmer who has grown that potato has used a high amount of pesticide which has caused an adequate amount of residue in it. I would never wish my customer to eat chips containing high pesticide residue.

The other way is Contract Farming.

So I come to you. You are a farmer, remember? :p I tell you that I want a specific quality and quantity of potato from your farm. I am ready for the provision of potato seeds, package of practices, technical guidance, farm inputs required to grow potatoes and even link you to a financial institution for taking agriculture credit. In return you just have to give me the harvested potatoes. I also offer you the price I will give you for each quintal of potatoes. You being a potato farmer get ready and agree with the offered price and guess what, the deal is done. Finally all the conditions verbally discussed are written on a legal paper and after reading that we both signed that agreement. This is contract farming. How cool is that? I hope you are clear with the concept of contract farming. If not, no worries, continue reading, you will understand step by step.

So now once we are clear about the concept. Let us talk about the different types of contract farming in India.

Nevertheless, let us look at them one by one. 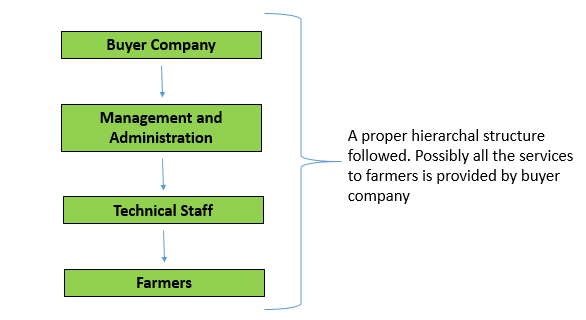 In this type of contract farming, there is one centralized processor or buyer who is the only entity involved in the contract with farmers. It is centrally monitored and managed by the buyer. All the services whether it is technical guidance or advisory is provided by them and no other stakeholder or entity is involved. The services by the buyer company may range from providing just good quality seeds or the extreme opposite by providing all the required services like land preparation, seedlings, Agro-chemicals and even harvesting services. Moreover, in this type of contract farming, the buyer procures from many small farmers rather than buying from a few large farmers. The model is better understood seeing the below figure.

The model is beneficial for small farmers. India has around 86% of the farmers coming under small and marginal levels. Hence, to give them the benefit of contract farming, a centralized model can be followed.

Unlike the centralized model where the activities were centrally monitored and managed by a single entity, in the multipartite model the different entities and companies jointly take part with the farmers. The services provided by the farmer will come from different organizations according to their expertise. For example, farmers will be provided financial services from the financial institutes who are part of the contract, they will be getting agri-inputs from the agri-inputs company, while specific technology needed at farm level will be provided by the tech company. And at the end, the harvested produce is taken by the main buyer company.

This model makes a large ecosystem where different stakeholders are involved under one project. Typically such projects are relatively big and a large quantity of produce is exchanged between the grower and buyer.

This type of contract farming system brings a win-win situation for all the bodies coming under the project. Farmers are benefited as they have access to all kinds of services. The figure below gives a clear idea about the multipartite model. It should be noted that there may be inclusion of kinds of organization other than described in the image below.

As the name suggests, it is an informal model. This model is followed by single entrepreneurs or small companies who enter informal contracts with the farmers for a particular season. This is majorly done for fresh vegetables and fruits. Unlike the rest of contracts which are long term, the informal model is not for long. It could be for a single season or two. Generally the duration of such a contract depends upon the need and resource arrangement by the entrepreneurs or small companies.

Generally, in this type of informal model, the buyer has to take help from the government regarding the supporting services like extension service, technology transfer, technical know-how as well as credit arrangement. The buyer can also form contracts with farmers without giving services to them while ensuring their produce will be bought by the buyer.

The harvested produce will be taken by the agents which will eventually be given to the buyer company. The intermediary model is practiced by such companies who do not want the extra work of managing the farmers and providing the services to them. Hence,

In the nucleus estate model the buyer company owns and manages the farm. The land which they own may be their own or taken on lease from the farmers. This type of contract farming model forms a closed ecosystem where the buyer has much control on the farm as well as all the activities done throughout the season. Hence, they can expect the exact quality of farm produce after the harvest. Such a model is followed by the companies who have their own land and the quantity produced from that land fulfills their need. 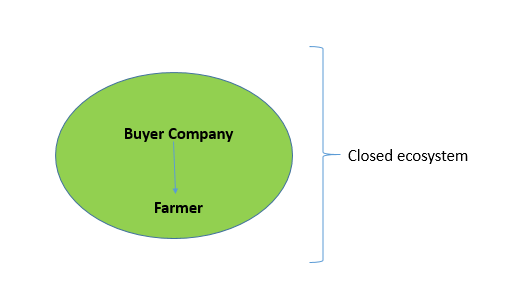 Contract farming comes with various benefits not only to farmers but also to the buyer companies. Let us see some of the benefits of contract farming:

Benefits to farmers:
Guaranteed and fixed pricing structure: Generally farmers are unaware of the price they will get from the market after harvesting. Due to supply demand fluctuations the agricultural products are priced beyond the affordability of the farmers. Contracts enable the price fixation before the season starts and give an assured price to the farmer.
Guaranteed buy back: The private companies guarantee buying of the farm products after the harvesting. Hence, farmers do not have to find a market to sell their produce. This also decreases the transportation cost which other wise farmers have to bear taking the products to market.
Introduction to the technology: Involvement of technology firms helps the farmers to adopt the latest technology. Eventually the best quality of produce can be grown and incomes for farmers increase.
Access to credit and financial services: India`s rural financing sector is still unexplored. Farmers are not aware of various financial services. Even if they are aware, there is poor accessibility. Contracts enable them to take the benefit of taking credit and crop insurance.
Skill and knowledge transfer: Through technical knowledge and advanced cropping schedule given by the buyer company farmers have an opportunity to learn something new and adopt in their daily farming activities.
Provision to inputs and production services: Not only the input provided but also the knowledge transfer of judicious use of those inputs are provided which is beneficial to the farmers.
Benefits to buyer:
Desired quality and quantity of produce: The firms can get the specific and timely delivery of products directly from the field.
Traceability: As the produce is grown under the constant monitoring and observation, the company is well aware of the ingredients used in the form of inputs to produce them which helps to get advantage of backward traceability.
Avoiding market supply-demand fluctuation: The market is never constant for the raw material produced at farm. However, the demand for processed food is increasing day by day. In such a case, it is very much important to have a constant supply of raw material. The contract based farming enables the constant supply.
Cost-efficient: The cost of procuring the farm produce decreases while procuring it directly from the farm gate as there is minimal involvement of middlemen like agents who charge the commission.

India has most small and marginal farmers. They are not able to avail some basic services required in Agriculture. The reason can be either they are not aware of such services or they are not able to access them. Contract farming in India can solve this issue. Moreover, there is constant price fluctuation in the market, due to which not only farmers but also exporters, agri processing firms are facing challenges. This system of getting under contracts gives them the assure price and the timely exchange of the farm produce. India has to evolve from its conventional way of farming. The first step is to adopt the contract farming system and scaling the model throughout the geography. Government can also support by actively making public private partnerships and working with farmers making many such joint ventures and achieving the target of doubling farmers’ income.